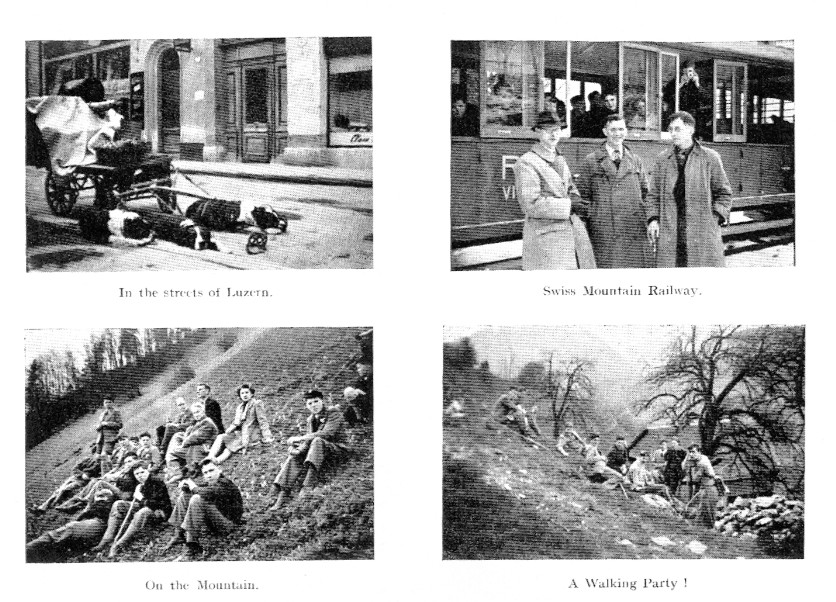 B.D.S., after a most handsome tribute to the staff, continued:  “I will attempt to reconstruct our journey from the county of Dorset to the shores of Lake Lucerne. At 7:30 in the morning of April 1st our contingent was beginning to gather at Ferndown prior to the arrival of the Royal Blue which was to carry us on the first stage of our journey. The coach finally arrived (needless to say a few minutes late) and all comfortably aboard, we set off in high spirits for Winchester, Little time could be spared for refreshments but everyone made full use of the few minutes at his disposal. At this stage it was thought fit to give a roll-call. Everyone was assembled, numbers scrupulously checked and finally, all present and correct, we prepared for the final lap of the coach journey."
A.D.P. gave a faithful account of the Lion Monument at Lucerne mostly in Latin and another young chronicler recorded his visit to Fluelen concentrating chiefly on William Tell.
E.Y., it is true, provided an original account of a Swiss walk, the originality consisting not only in the spellings, but in the way that he had written up a quiet stroll along clearly defined mountain paths into hazardous climb from which it was nothing short of miraculous that anybody returned alive. Perhaps a few paragraphs are worth rescuing.
"At last we reached the difficult part of the climb, a wooded belt which was ridged by layers of rock. Some of the trees were rotten and we had to be very careful of the ones to which we clung.  At this stage progress was very slow and it was a long time before we reached a path above the trees.  As we left the woods a frightened Chamois leapt and bounded down the mountainside.
We were now on the verge of the snow line and we did not continue to climb, but followed the path and were soon directly above Gersau.  Then we decided that it was time to go down again, fearing that we might find ourselves on a precipice if we continued to go round the mountain.
The descent was quite dangerous and the first part of it was tackled on hands and knees.  However, by creeping from tree to tree we eventually regained the grass slope.  The boys thought that it would be easier going on the grass, but we were soon disillusioned, for we found the slippery turf was even more treacherous than the rocky ground.  Eventually we reached the safety of the broad path, and by this route we soon reached the lower ground.  Mr. Maiden then took us into an Inn and treated us all to a glass of lemonade.