General Alfred Dudley Ward was our most distinguished old boy.
His career is quite closely followed in the Old Winburnian. We first meet him whilst still at school. In 1919 he was part of a team shooting for the Lucas-Tooth Shield, a prize competed for by several Grammar schools in Dorset. He came 2nd in the under-13 hurdles race. Later he was again 2nd in the long jump, and he clearly competed in all the sports day activities.

At the end of the summer term 1923 he left school and joined the Eastern Telegraph Co in Hampstead.  Posted to their office in Gibraltar, he sent a light-hearted letter in which he describes singing at a concert raising funds for St Dunstan's. He sang a couple of songs and made a hit with one entitled "germs" which describes the dangers of over-eating and -drinking. Can he ever have imagined what the future would hold?  He paid a visit to the school in 1926, the year in which he left Eastern Telegraph to join the army as a private. Next we read about him having been selected for Sandhurst officer training college, appointed 2nd Lieutenant in 1929 and posted to the Dorset Regiment in India in 1931. At first aide-de-camp to the commander of the Lahore District, then promoted to full Lieutenant, he went to the staff College as an instructor from 1940 to 1941.

In August 44 he sends his best wishes to all O.W.s, whilst the following appears in the Daily Telegraph ( as reported in the Winburnian ) "the 4th British Infantry Division commanded by Major-General A Dudley Ward took part in heavy fighting between the Gothic Line and the Via Emilia. It was responsible for the capture of Monte Cassino, says Exchange". In no. 98, summer 45, "we offer our congratulations to Alfred Dudley Ward Major-General DSO on whom has been conferred the CBE. He has now been appointed Assistant chief of Staff to Field-Marshall Alexander".

No 100 of the Winburnian in 1946, which also neatly coincides with the 450th anniversary of the school, hails the General himself, who visits the school to distribute the prizes. By this time Chief of Staff of the Mediterranean Theatre, he stresses the importance of activities rather than just academic work in the school. The person most needed in a difficult situation is the stout-hearted man with plenty of character. Service means giving rather than taking and the important thing is what we put in to a job not what we get out of it. Later to the delight of the boys, the General took part in the singing of the school song which he said he remembered well though it is 25 years since he attended a speech day as a boy. Mr L H Mottram, the only master who remained since the General was at school, recalled his outstanding athletic achievements, both at school and in the army, and expressed the pride of the school in the honour which he had brought to it.

In our mag. next year is a letter from him telling that he is back in England as a student at the Imperial Defence College and describes the course as intensely interesting and a great change from his duties as Chief of Staff in Italy. No 107 in Spring 47 shows Dudley Ward as Director of Military Operations at the War Office, and by Nov 48 he is commandant at the Staff College in Camberley. 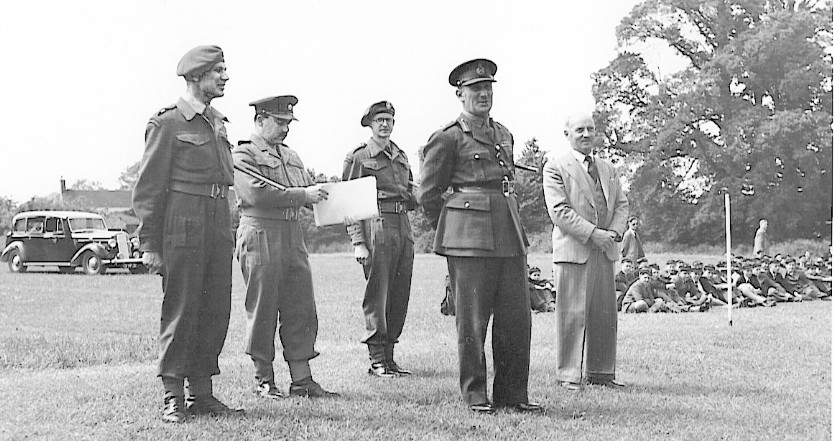 His next visit to the school comes in Autumn 1950 when he carried out an inspection of the Cadet  Corps, as is shown in the picture above. Afterwards he took the Chair at the annual dinner of the OWA. The Toast to the Chairman was proposed by Mr Mottram who gave a rollicking account of artillery bombardments of the fives courts and flanking attacks around Big School, leading to the important educational work being carried out by the Army, influenced greatly by the powerful personality of the General, as intelligent, thorough and efficient as he had shown himself at school. In replying he said that in some respects the army resembled a school, the value a boy got from school depended not so much on what the school did for him, as on what he gave to the school.

In no. 114 Spring 51 we send congratulations on being made Commander 1st Army Corps, British Army of the Rhine with the rank of Lieutenant-General, whilst in no. 116 spring 53 we congratulate SIR Dudley Ward on becoming Deputy Chief of the General Staff upon the award of the KCMG, having been knighted in the New Year's Honours.

In the same year he came to present the prizes on Speech Day, an outstanding event for the school. After the presentation he addressed us as an old boy familiar with the school song which told of the foundation of this old school. At the sight of girls, some old boys might wonder if the good Lady Meg was turning in her grave! The traditions of the school were enshrined in the school song. He listed three outward and visible signs of a good school. First was academic achievement, the second was the conduct and bearing of the pupils, and the third their keenness to devote time and labour to activities of the school unconnected with the classroom. He concluded by giving two pieces of advice: each should put into the life of the school as much as he could: to those leaving he advised that they should go for what they really wanted to do and not be afraid to change their occupation if they found it did not suit them.

Such is the career which we can follow in the school mag, but it doesn't do justice to the whole story. He served in pretty well all the hot spots during and after the Second World War. Under his command the 17th Brigade advanced up through Italy in 1943-4.  In 1944 promoted to command 4th Division in the famous battle for Monte Cassino, he was awarded the Distinguished Service Order. Then he took the division on to the Gothic Line, the Rimini Line and the river Romagna.

After this the division was ordered back to Cairo for rest and re-organisation. In the meantime, Tito was conquering Yugoslavia for the communists, and the Greek communists were closing in on Athens, where Churchill himself went to try to stop them taking over. To deal with this, Ward was ordered to divert his Division to Greece. He flew in to Kalamaka airfield uninvited, and when the partisans attacked, he was forced to join in the firing line to hold them off. Gradually they got more troops ashore and in an entirely unplanned and improvised operation, began to roll back the partisans and fought their way back into Athens, street by street. It was a very close-run thing, almost entirely forgotten now, otherwise Greece would have become a communist country. This made him a hero by any standards.

His career continued after the war with command of the 1st British Corps in Germany. Then came the problems of Suez. Later he was Commander-in Chief Northern Army Group when the trip-wire system was introduced by NATO, then to the Near East where he set up Britain's Sovereign Base in Cyprus after their revolt against British rule.

Finally he was appointed Governor of Gibraltar 1962-65, at a time when Franco was pressing to get the British out. In Gibraltar he had to supervise the introduction of civilian rule, which he carried out with much tact and enabled that fortress to settle into civil life as an almost independent place. It was his last posting after which he retired; I'm sure among the most successful senior officers of our time.